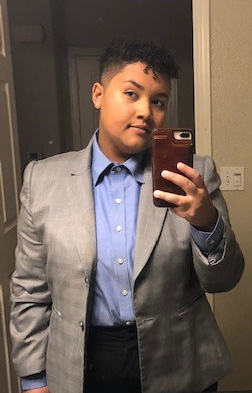 I’m often asked where my name comes from, and on the days I can do more than shrug, I explain that when I was born, a cousin held me and cooed “Aw, it’s a little Bucket”. Not a girl. Not a boy, but a Bucket. It stuck. When I was a kid I remember being gendered by family, friends, and strangers. I always preferred to be gendered by strangers because sometimes I would get “he” or “she”, but it was always endearing until my mother would correct them one way or another. My presentation began to get policed: with ribbons, femmed up, pink. I guess their questions of my gender made her uncomfortable, but being a gender-blender always felt natural. In fifth grade I was Darth Vader for Halloween. It was my friend’s father’s first time meeting me, and before we went out to Trick or Treat, he wanted to “rough him up a little”. As the noogie began, my friend mentioned that I was a girl. Her father backed off, nearly terrified, but I couldn’t help but to feel like I was being engaged with the way I was supposed to be. I explored masculinity, but it was difficult in my adolescence to always be told to soften-up my appearance. In high school slam poetry found me, and not only did it become an outlet for teenage angst, describing dysphoria, and calling out the 1 percent, I was able to present however felt the most comfortable to me on stage: bow ties and button-ups. There was a special kind of liberation being able to wear the clothes that felt comfortable in a community that often deconstructed the very idea of gender, body image, love, and other cliches. When prom season came around, person after person asked if I was going to wear a suit or a dress. I arrived in a super cute ballerina-style dress, and left to the after parties in a classic tux.

In college, I found myself teaching my freshman roommates about gender being a spectrum and completely different than biological sex. Half of my roommates respected my initiative and pronouns, and the other half avoided me. I found a mentor, a 5th year student who was also non-binary, and I stuck close to them until their graduation. In my second year, I made friends who were transitioning with hormones and surgery and socialization, I struggled to see myself partaking in something similar. It didn’t quite feel like I needed to masculinize my appearance. My biggest problem was how other people saw me and treated me based off of preconceived notions of a gender that  I did not identify with. In many ways, I was already the man I dreamt of being: with or without makeup or masculine clothing. I was strong, determined, naturally masculine (whatever that means). I enjoyed watching my friends transition and go through the ups and downs it entails; I often thought about what it would mean for me to transition,but felt trapped at the idea that I wouldn’t be able to pick and choose how my body would change. I wanted a deeper voice and facial hair, but would prefer to pass on other body hair. More muscle mass would be nice, but I had a substantial feeling that my thunder thighs wouldn’t magically thin into longer, slender pillars. I negotiated with the idea of a physical transition because I had examples, but ultimately decided against it.

As a professional and professor at a university, I try to have as much open dialogue with my students about gender how there is diversity in biological sex, presentation , and gender. At times it’s difficult to explain to them that my gender varies, and I understand how it’s easier to have a more consistent gender presentation, but that does not feel authentic. When I felt like wearing dresses, I knew that gender is a social construct. True gender is inside, and the outside was for other people. I knew I was a masculine person, yet I experimented with makeup although I didn’t want people to view me as a more feminine version of myself. I objectified social cues and clothes and other things that held so much gendered meaning; but I forgot that others may not understand and eventually decided that their misunderstanding was going to be more of their problem and not mine. This concept remains difficult to relay in my relationships today, even as an adult. There are so many things that are ingrained in us all to perpetuate the gender binary. I’ve noticed that community is difficult outside of an academic setting, because even in the trans community, “realness” and passing is championed. I have no desire to pass all the time. Sometimes. But not regularly, and that has a lot to do with the way I feel like presenting as a masculine-of-center non-binary person. Being a Black, non-binary person adds another dimension to others’ misunderstandings, as being gender variant is often reserved for skinny, white, androgynous people. I admit that I will perform gender way before I perform Blackness, and I think the combination of my identities and how that shows up in the world is what has remained invisible until now.